Wage Garnishment After Filing for Bankruptcy 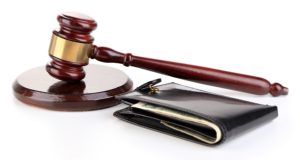 No one likes his or her wages to be garnished and everyone wants money that was garnished to be returned. Those are just the facts. But depending on when your wages were garnished, what stage of the transfer process the funds were at when they filed, and whether or not certain motions are filed, you may or may NOT be able to get your garnished wages returned due to bankruptcy.

Did that sound unnecessarily vague and convoluted? I’m sorry, that is a pretty accurate description of the wage garnishment process.

First off, the details may vary by state. In California, if you had wages garnished prior to filing for bankruptcy, you probably won’t get them back. It’s more likely that the funds will end up at their original final destination: the law firm or collection agency that executed the garnishment.

If your wages are being garnished at the time that you file for bankruptcy protection, that is when the creditor was notified. When they received the notification of bankruptcy, the creditor on whose behalf the wage garnishment was executed sends a notification to the sheriff’s department to terminate the wage garnishment. The sheriff then turns around and notifies your employer of the termination and your employer will then stop deducting money from your paycheck. At this point, sheriffs send notice to the debtor and the debtor’s attorney (this particular step may not occur depending upon your state of residence, but it does occur in California).

In the letter the sheriff sends to you and your attorney, it states that the funds are being held. It also states that unless there is a bankruptcy court order, the specified funds will be sent along to the creditor upon the close of the bankruptcy case.

Again, the process may vary depending upon your state of residence, but this is the procedure in place in the state of California. In some states, the bankruptcy trustee assigned to your case may file the motion to designate garnished wages as a protected asset of the case. In other cases, the money help by the sheriff cannot be protected by bankruptcy. The motion is filed by the trustee who then receives the funds from the sheriff and the trustee then includes the funds in the assets distributed amongst the bankruptcy petitioner’s creditors. In this case, wages that have already been garnished are simply gone and the debtor would have to move on and focus on the eventual discharge of all remaining debt at the close of their bankruptcy case.

If you have questions or concerns regarding bankruptcy or wage garnishment before or after bankruptcy, please get in touch with one of the southern California bankruptcy attorneys at Westgate Law.