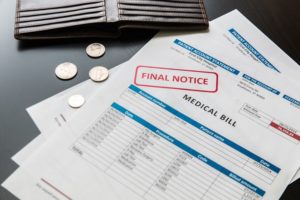 When a couple divorces, medical debt is typically treated alongside all other debt accumulated during the marriage to the court’s division of marital assets. It is decided right there in the divorce decree who pays how much of what. If things go perfectly, both parties handle what they’ve been assigned.

Yet divorce is also one of the most commonly cited reasons for filing bankruptcy. It’s a time of upheaval. Expenses are typically doubling as one household is becoming two. In some instances, there was only one income between the two parties. Finances can quickly become impossibly tight. So it should come as no surprise that in many cases, one or both parties in a divorce end up filing for bankruptcy.

When only one party files for bankruptcy, the other party can feel like they’ve been left holding the proverbial bag. Yet this is another seemingly impossible problem to which bankruptcy law holds the solution. The key to this issue is the divorce decree, otherwise known as the marital settlement agreement. This agreement designates whether or not you could have the right to force your ex to contribute towards the bill in this situation.

Details of the Example: My Ex Declared Bankruptcy and Left Me Holding the Unpaid Medical Bill

At the time the bill was incurred, you were married. As a couple, you made some payments towards the bill, but did not pay the balance in full off prior to your divorce. Both your names were listed on the bill leaving the hospital (and eventually the collection agency) seeking payment from both of you post-divorce. When payment was not received, both you and your ex were sued for payment.

This situation is fairly common – even more so when the divorce becomes contentious. One spouse will desperately want the proceedings to come to an end. To encourage the cessation of negotiations and hearings, etc. they will agree to take all (or a majority of) the debt associated with the marriage. In the back of their mind, they are already aware that a bankruptcy is looming and assume that it doesn’t matter anyway. Unfortunately, upon signing the divorce decree, the debt accepted through the decree is exempted from bankruptcy’s ability to eliminate debt.

If you have concerns about how your ex’s bankruptcy could negatively affect you or about how your divorce decree could affect your ability to utilize the protections offered through bankruptcy, please get in touch with one of the experienced southern California bankruptcy attorneys at Westgate Law so we can discuss your situation.